On all ConvertFlow plans, you can launch CTAs as "standalone CTAs" from each CTA's launch page.

However, while on ConvertFlow's paid plans, you'll have access to advanced campaigns too, which are flows and broadcasts.

This means you'll have 3 campaign types, each with a different use case and priority level. Standalone CTAs, flows and broadcasts.

These are ordered by campaign priority level:

High-priority broadcasts are useful for one-off promotions, and also have the ability to be scheduled to run during a timeframe.

To learn how to use Broadcast campaigns, here's the guide →

Flows are the type of campaign you should to use for displaying lifecycle CTAs. You can define lifecycle stages, add goals to each stage, and get funnel reports.

CTAs launched as goals in a flow stage are separate of your other campaigns, meaning CTA goals have their own campaign status, targeting, completion automations and reports.

To learn how to use Flow campaigns, here's the guide →

Whenever you create a CTA, you can launch it from it's launch page, it's a "Standalone CTA" campaign. These campaigns have the lowest priority, and are available on every ConvertFlow plan.

Standalone CTAs are separate of your other campaigns. They have their own campaign status and targeting, and are managed only from the CTA's launch page.

To learn how to launch standalone CTA campaigns, here are guides:

🎥 How to create and trigger overlay popups

🎥 How to create and trigger hook popups

🎥 How to create and trigger sticky bars

🎥 How to create and launch embedded CTAs

🎥 How to create landing pages & funnels

Use the admin widget

When you're logged into ConvertFlow and you visit a website that has a site script from your account installed, you'll find the ConvertFlow admin widget. It's a tiny blue ConvertFlow icon shows on the bottom left corner of your website.

If you click that icon, a panel slides out, showing you insights into what campaigns are targeting (ordered by priority level), which of their targeting conditions are true/false at the time of page load, what flow stage you're in, etc.
You'll also notice a contact profile, showing you who you are currently tracked as and what data is being used for targeting.

There’s also a link with easy access to your ConvertFlow website’s dashboard, and a link to reset your tracking session. 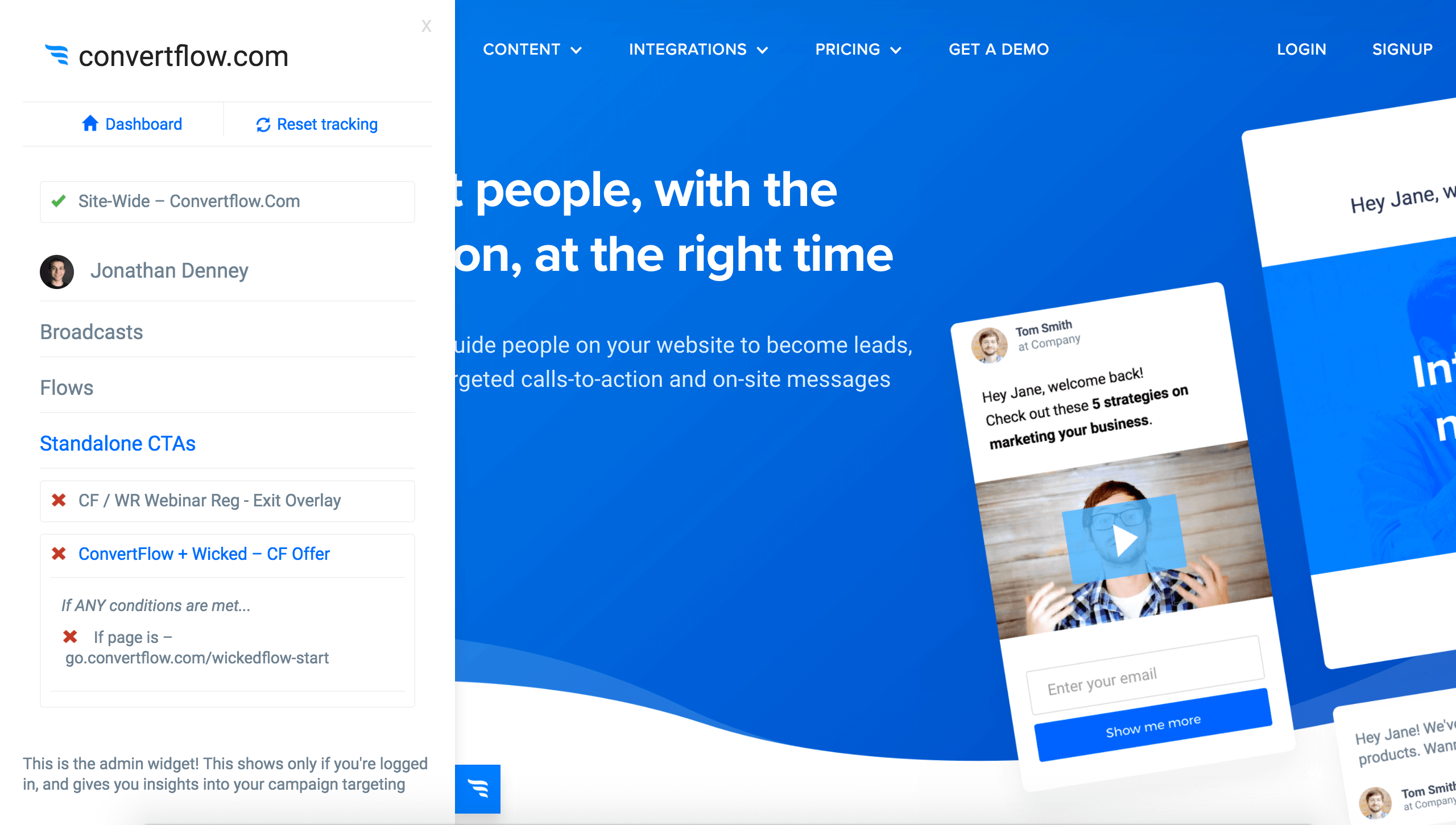 Most ConvertFlow users start by creating CTAs and launching them as standalone CTA campaigns, due to the linear onboarding process and ease of use.

However, once you've upgrade and have access to advanced campaigns, you may now want to move over some of your CTAs into a flow.

To do this, create your flow, add your existing CTAs as CTA goals, activate these CTA goals, and then deactivate the standalone CTA campaigns for the CTAs you have added to a flow. This avoids campaign overlap and potential confusion later on.

Sometimes you need to target a specific landing page or blog post for a promotion with multiple CTAs, like a hook and exit intent popup overlay, for example. And due to the one-off nature of the campaign, you don't need to worry about it being automated as a lifecycle stage in a flow.

For this case, broadcasts are very handy. You can create a broadcast campaign for that promotion, create your CTAs, and add them to the broadcast. Then, target the broadcast to that promo page. Now, you have organized your CTAs and brought together your stats into 1 campaign that can be managed from one interface.